Evening departure on Royal Air Maroc for Casablanca. Dinner and wine on board.

Arrival at Casablanca Mohamed V Airport, welcome and assistance. Orientation tour of Casablanca with Habbous Quarter, the United Nations Square, the exterior of royal palace and the internal visit of Hassan II Mosque. Casablanca harbors the largest Jewish community in Morocco and has numerous congregations, active communal institutions, and many highly recommended Kosher restaurants. Visit the Mellah (Jewish quarter) with its temples and synagogues such as Bet-El, Em Habanim and Neve Shalom. Depart to Rabat and Sale. Visit the Chellah and Kasbah of Oudayas located next to the Medina within the ramparts of the old city. The Mellah, with its narrow lanes and colorful courtyards, now the home of few Jewish families. Continue to Sale, the twin city of Rabat and the birthplace of Rabbi Hayyim Ben Moses Attar, the famous 18th Century scholar and Kabbalist, known throughout the Jewish world for his bible commentary the “or hahayyim.” Return to Rabat for overnight.

Departure to Meknes where the Jewish presence in the imperial city is evidenced by Hebraic epitaph dating from the Christian era as well as Greek inscriptions that still appear in local synagogues, and a place of pilgrimage where the tomb of Rabbi David Benimdan, “the patron of Meknes” is located. The crowded old Mellah, known by historic Jewish streets names is not to be missed. There is also the new Mellah (Jewish ghetto) which harbors eleven synagogues, eight of which are still in use. Visit Bab El Monsour, the Hedim Square and the mosque of Moulay Ismael. Continue to Fes via Volubilis, a very preserved Roman city. Check in at the hotel and overnight.

Fes is among the best known cities in medieval Jewish history, it was home to one of the most influential Talmudic scholars of all times, Rabbi Isaac Alfasi, as well as Maimonides in the years 1160 to 1165. Visit the Mellah with all its synagogues. Optional visit to Bhalil and Sefrou; visit the cemetery where Rabbi Lahou Harroch and Rabbi Raphael Moshe Elbaz are buried with the Mellah. Return to Fes and overnight at the hotel.

A citadel of magnificence, this age-old city is irresistible as it unfolds– in every narrow alley, wide street, old or new medina, palatial houses or hillsides– the story of a whole civilization’s treasure, similar to Florence or Athens. From being Morocco’s first capital in 808 AD to becoming the Imperial of all Imperial cities, Fez is a spiritual and cultural center with many facets. Your two-day stay in this unmatched splendor will take you back in time while visiting the oldest university in the world (before even Oxford or the Sorbonne).

After breakfast depart to Erfoud via Azrou and Ifrane city. It is said that Ifrane was the capital of a Jewish kingdom in the far off past. Not to be missed the village’s only synagogues and the cemetery, which has been the center of pilgrimage for Moroccan Jews for centruries. Stop in Midelt and continue Erfoud. From there a land rover with a driver at the clients disposal for the sunset al and Bivouac at Merzouga dunes. Berbere dinner and overnight in the tent (or return Erfoud for accommodation at the hotel).

After another breathtaking view of the sunrise, return to Erfoud for orientation tour to continue to the Todra Gorges known for its impressive bare escarpments. Continue to Tinerghir and visit its Mellah gateway and the ancient colorful Jewish quarter. Depart to Ouarzazate via El Kella Des M’gouna and visit of Tiliit (5 miles from Kella Des M’gouna), known as the ancient city of Jews of the Dades. The fortresds of Tiliit has been the center of Jewish region ruled by the Spanish – Jewish family of Perez from the end of the 15th century until the reign of Moulay Ismael in 1672. Continue to Ouarzazate, check in at hotel and overnight.

After breakfast visit the Taourirt and Tifoultout Kasbahs, ancient residence of Glaoui (the former pacha of Marrakech). Then, depart to Marrakech via Tiz-in-Tichka pass (2260m) and Taddert. Afternoon sightseeing tour of Marrakech where the Jewish community increased in 1603. The Saadian dynasty, made Marrakech their capital, and converted the El Badii Palace as a Mellah which became a home of a thriving community of native Spanish Jews, famed for its rabbinical schools and scholars. Visit the Rabbi Hanania Hacohen Cemetery which is also the burial place of Rabbi Mordekhai Ben Attar and Rabbi Pinhas Hacohen Azough known as the “patron of Marrakech.” Return to the hotel and overnight.

Day devoted to visit Marrakech 2nd oldest imperial city with the Badii and Bahia palace, the Saadien tombs, Dar Si Said museum, Menara Gardens and Koutoubia Minaret. Afternoon, strolling through the narrow streets of the old medina of Marrakech discovering artisans still working in the old-age traditional way. End up at Djemaa El Fna Square, considered to be the most famous and popular place in Marrakech. Return to Marrakech and overnight at the hotel. Optional: in the afternoon excursion to Ourika Valley to visit the famous tomb of Rabbi Salomon Ben Elhens.

Transfer to Menara Airport in Marrakech. Assitance to check-in at the airport and boarding formalities.

Accommodations in the category of hotel chosen

Tips at the hotels

Drinks & meals not mentioned in the itinerary

Any other items which is not mentioned above

Tips to the tour guide & driver 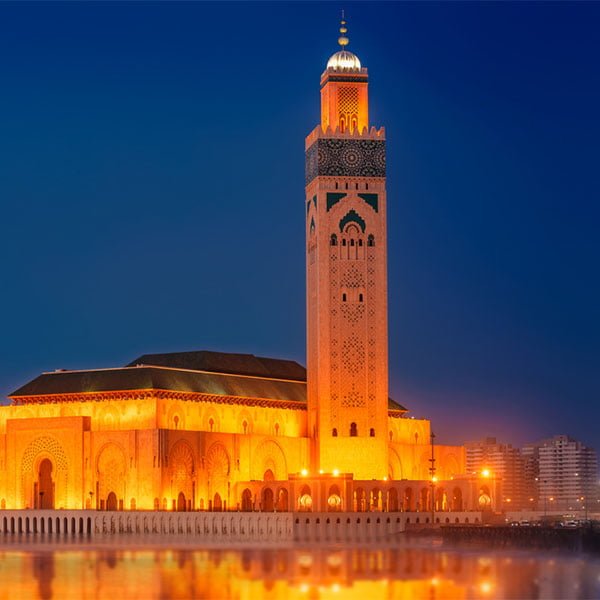 Explore dramatically beautiful Fes, the oldest Imperial City, founded in 790 A.D. Seeming to exist somewhere between the Middle Ages and today, the Soul of Morocco stimulates the senses with its visual details, haunting sounds and rich aromas.